Do you love meat? Are you missing late night smoky grilled meats? Do you love hands-on dining where you get to do it yourself? Korean BBQ is perfect for you.

This is a little 101 on all things Korean BBQ. What it is, what you should buy, how you should set the table, and how you do it. Korean BBQ for everybody!

Why you should throw yourself a Korean BBQ party

Korean barbecue is all about balance and contrast between flavors and textures. It’s completely customizable so that everyone at the table can eat exactly what they want.

Here’s what happens when you go out for KBBQ: You sit down and a bunch of tiny plates that you haven’t ordered come out. These are banchan: little side dishes that go with Korean BBQ. You order your meats and they come to the table, raw. You grill them, wrap them up in lettuce, dip/top them, then eat them up. Everything is smoky, meaty, savory, and delicious. Eat meat, drink copious amounts of alcohol, and repeat!

Sounds fun right?! Mike and I LOVE going for Korean barbecue. It’s one of our things – late night grilling and chatting the night away. I like the interactive part of it and Mike likes the meat and alcohol. We both love the food. We’ve eaten at countless Korean barbecue restaurants and earlier this year, when everyone was in lockdown, we were really, really missing Korean barbecue. It was an itch we just had to scratch. So we did the thing: the ultimate way to KBBQ, right at home.

What is Korean BBQ

Korean BBQ is the popular method of grilling meat right at the dining table. Korean BBQ restaurants have gas, charcoal, or portable stove grills built into the tables. Marinated meats like bulgogi and kalbi are grilled and eaten along with various small Korean side dishes called banchan.

This is a really long post, but the gist of it is: grill meat at the table, pop it into a leafy vegetable, top it off with sauce and enjoy.

At the very minimum you’ll need: 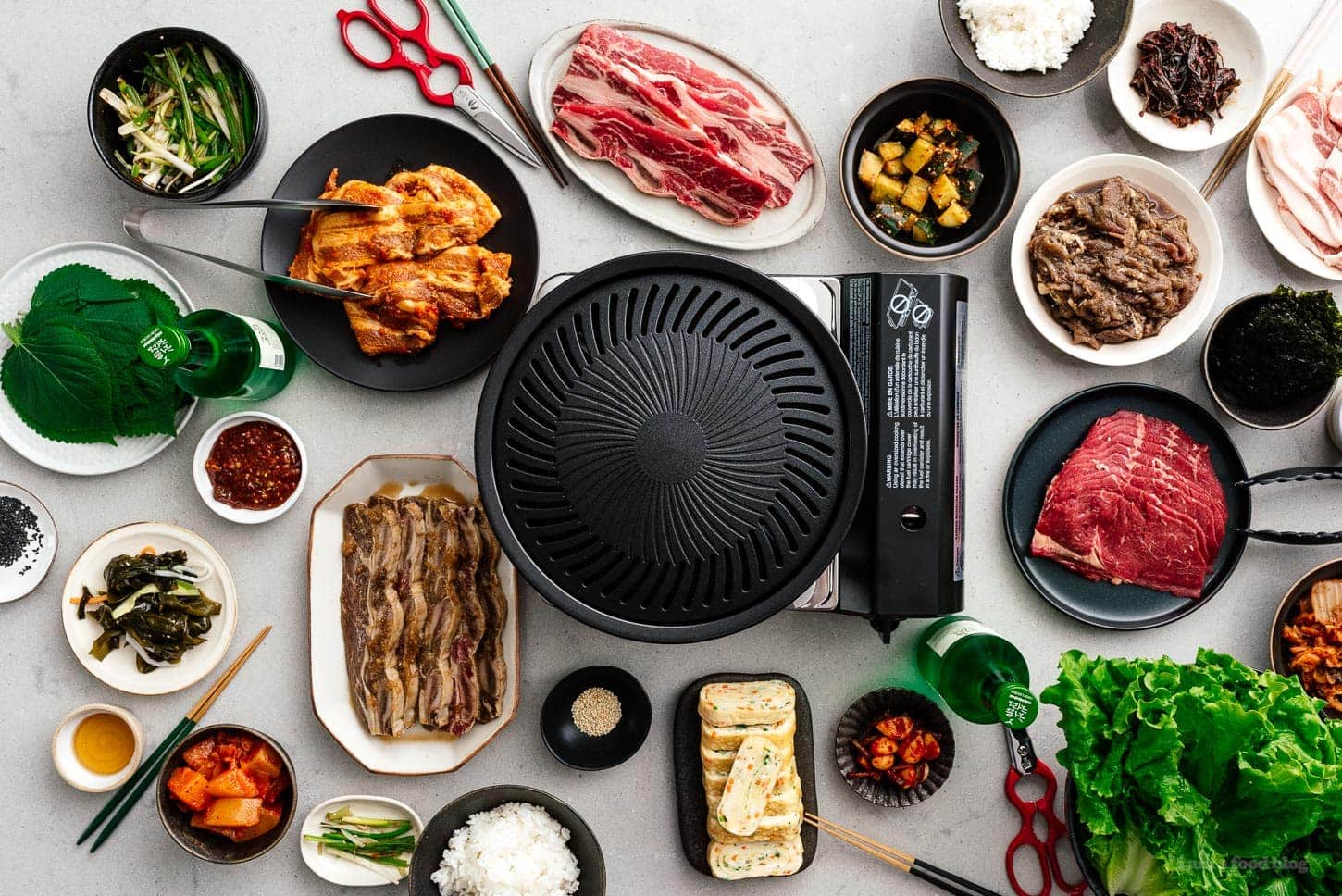 How to make Korean BBQ 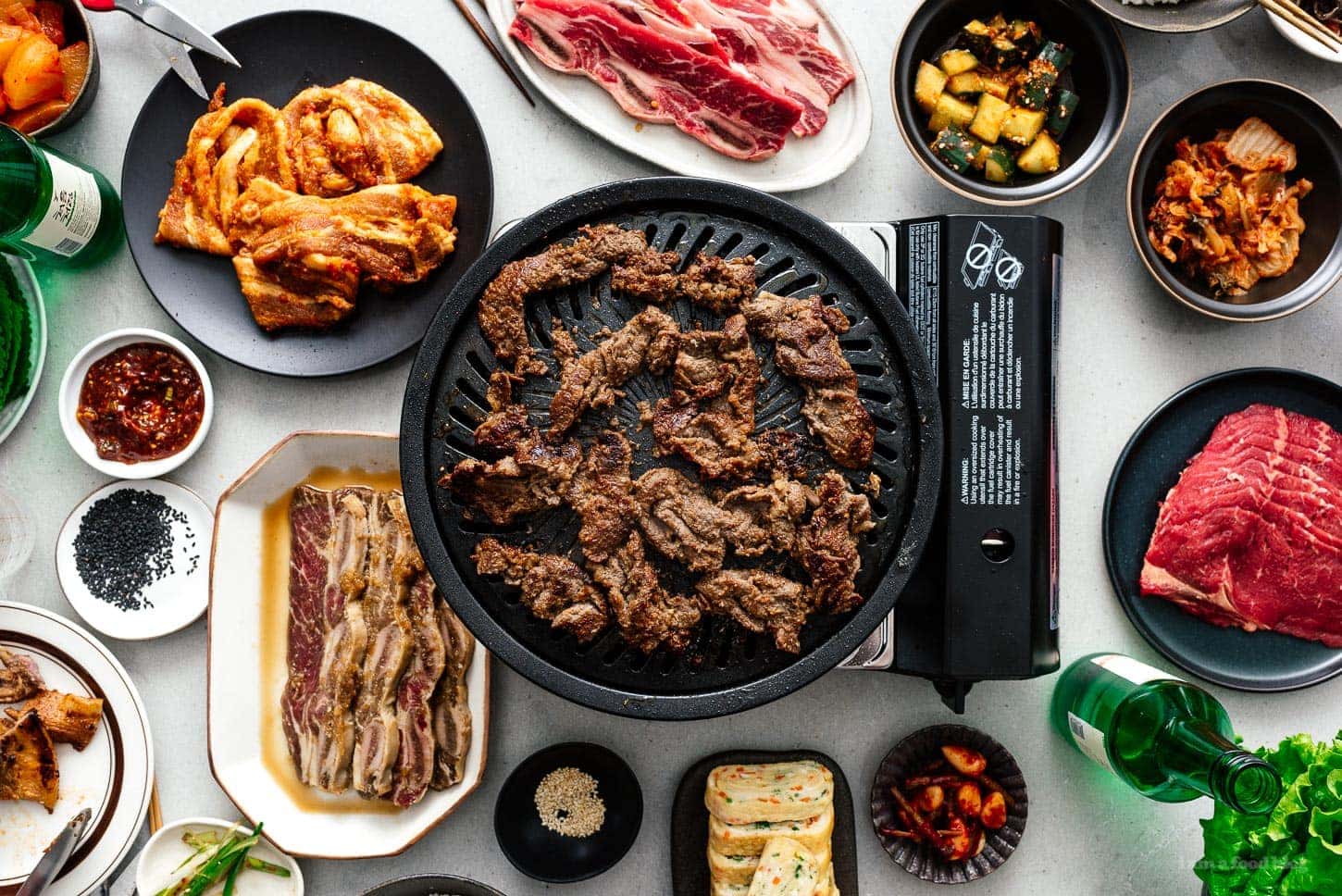 How to eat KBBQ

Korean BBQ is traditionally eaten in ssam form. Ssam just means wrap, but the implication is a one-bite-sized wrap of fresh cold lettuce with a small piece of grilled meat and topped with sauce (ssamjang). 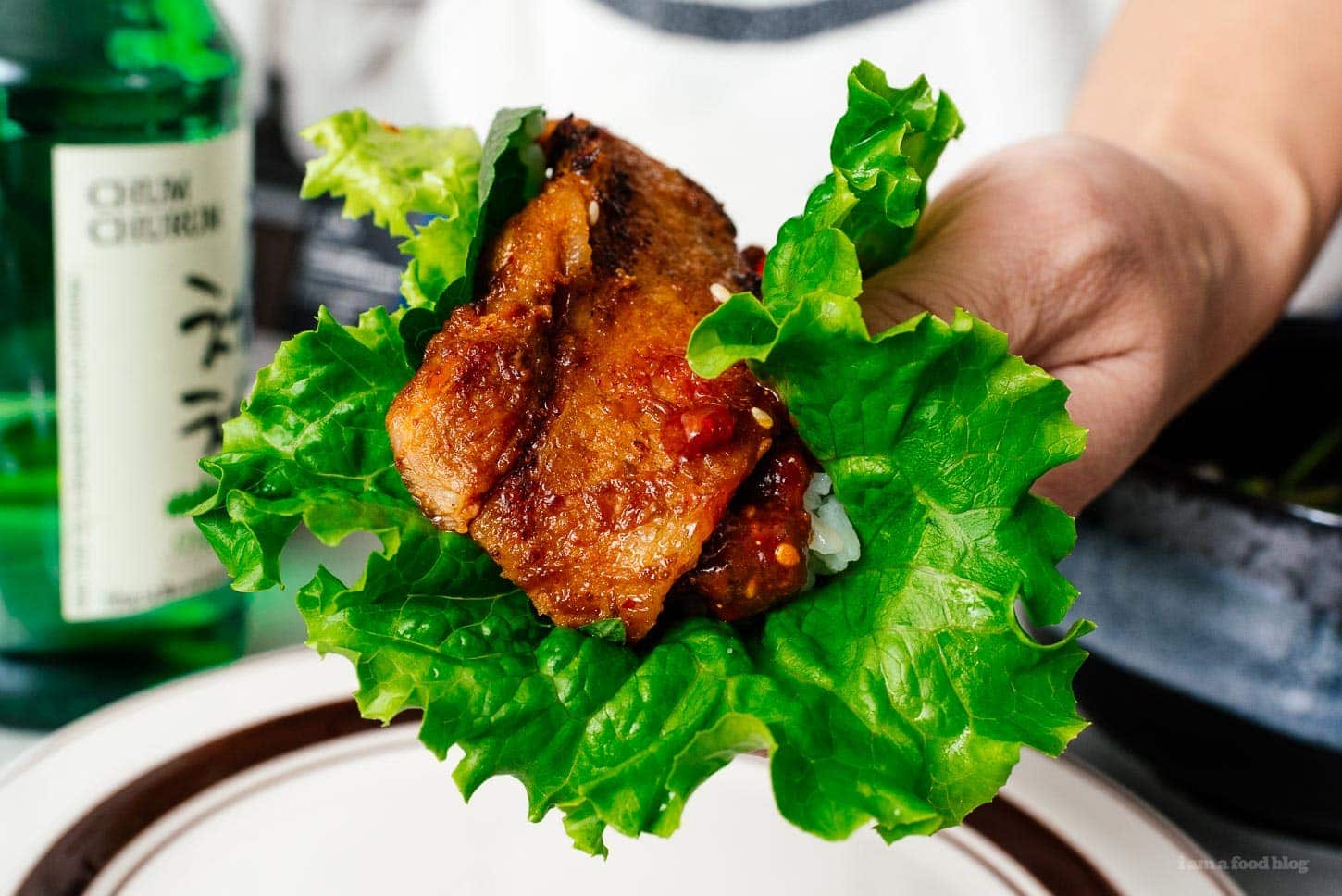 What should I buy for Korean BBQ at home

To be honest, you can probably buy everything you need at H-Mart or a local Korean grocery store. They’ll even have marinated meats for you. If you don’t live near a Korean grocery store, you can buy meat and marinate it yourself. Don’t sweat it if you don’t have any banchan. At its core, Korean barbecue is about wrapping delicious meat in lettuce and dipping it in ssamjang.

What kind of grill for Korean BBQ? 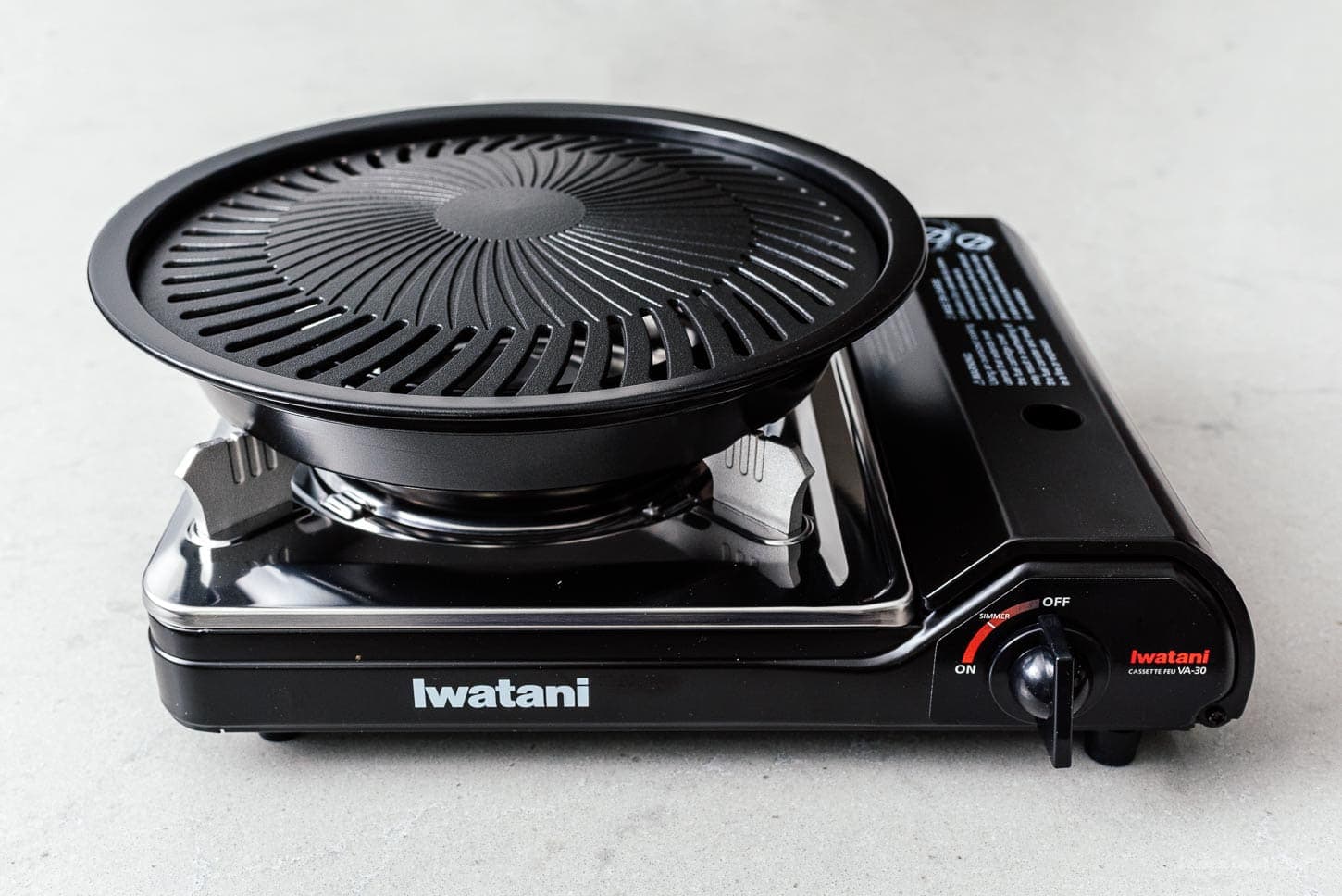 The most important thing you’ll need for Korean BBQ is a grill or hot plate. A korean BBQ grill is specifically designed to let the fat safely run off without flaring up so that you can cook indoors, and also not let any thinly sliced or tiny pieces of meat fall through. They sell a bunch of different ones online and they also sell them at Asian grocery stores. Besides the grill, you need a heat source. Your options are:

You’ll want to keep a window open during your KBBQ party no matter what grill you use because it will get smoky. If you have a backyard, you can do a backyard KBBQ party but if you don’t, you can do it at home too, just keep your hood fan on and know that you’ll need ventilation. Maybe keep a stick around to press the hush button on your smoke detector if you have crazy tall ceilings. Read more in the smoke section below. 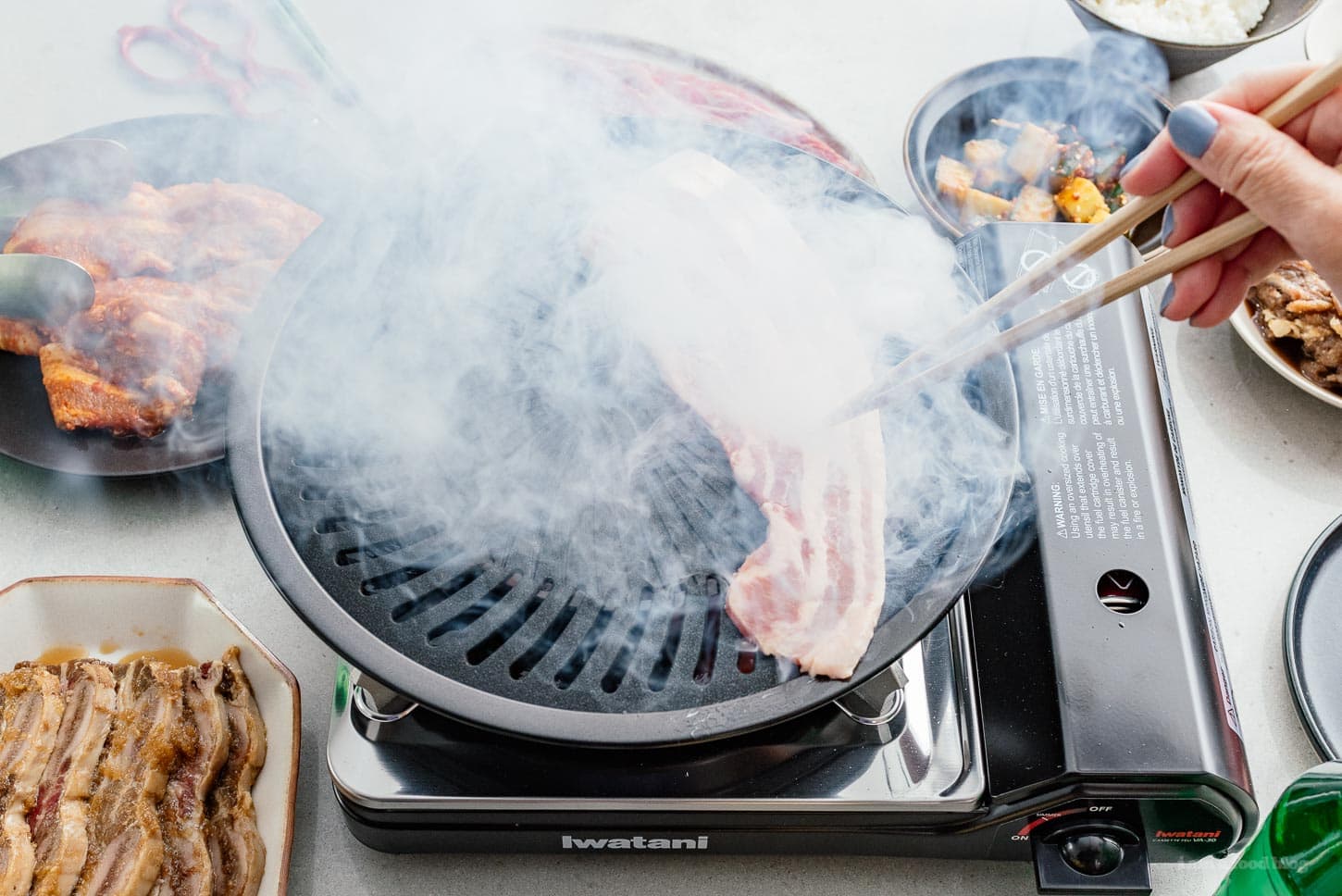 Aside from the grill/hot plate, you’ll need a bunch of tiny dishes for your banchan, small individual dipping dishes for sauces, tongs, scissors (for cutting the meat into smaller pieces) and plates and bowls for eating. And the food, of course!

Where to buy the best korean bbq meats?

If you have access to H-Mart, a nation-wide Korean grocery store, it’s going to be the absolute best place to buy the best KBBQ meats. They will have all the right cuts and they even sell the meats marinated, if you want a super easy chill vibes BBQ night: 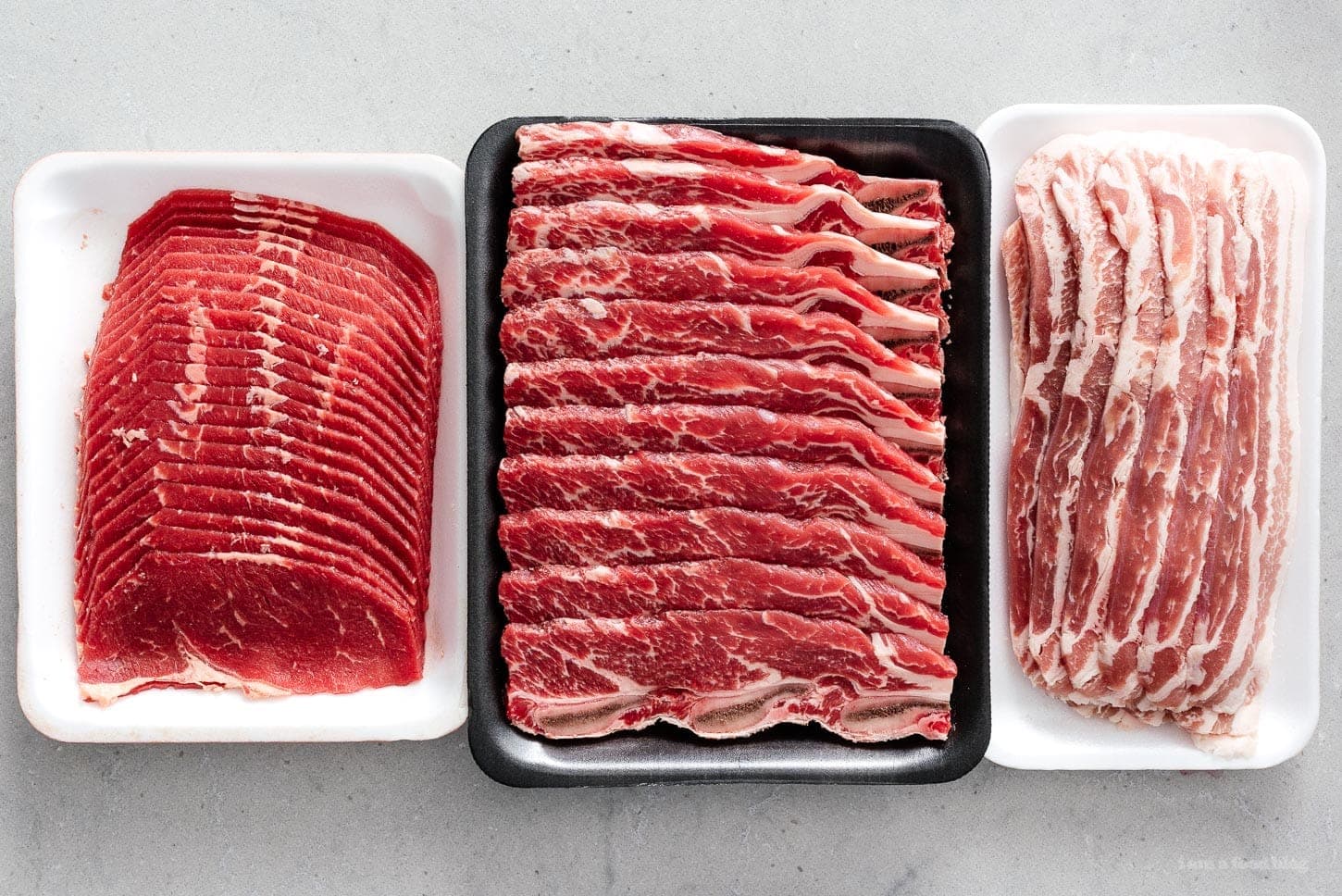 After H-Mart, most Asian grocery stores will have a selection of pre-sliced meats in the frozen section that are probably meant for hot pot but will work great for KBBQ.

And, finally, you can hit up the regular grocery store or a butcher. You can buy a rib-eye, pop it in the freezer and thinly slice it. Instead of Korean flanken-cut short ribs, get some boneless short ribs and slice those thin as well. Most grocery stores carry pork belly slices (sometimes called side pork) and chicken is always a good choice too, especially when you marinate it in the spicy bulgogi marinade.

The best cuts of meat for KBBQ

Even though they’re both beef, they’re not the same. The biggest difference is the cut of meat used. Bulgogi is made with thinly sliced meat and kalbi are short ribs. The marinade is essentially the same. 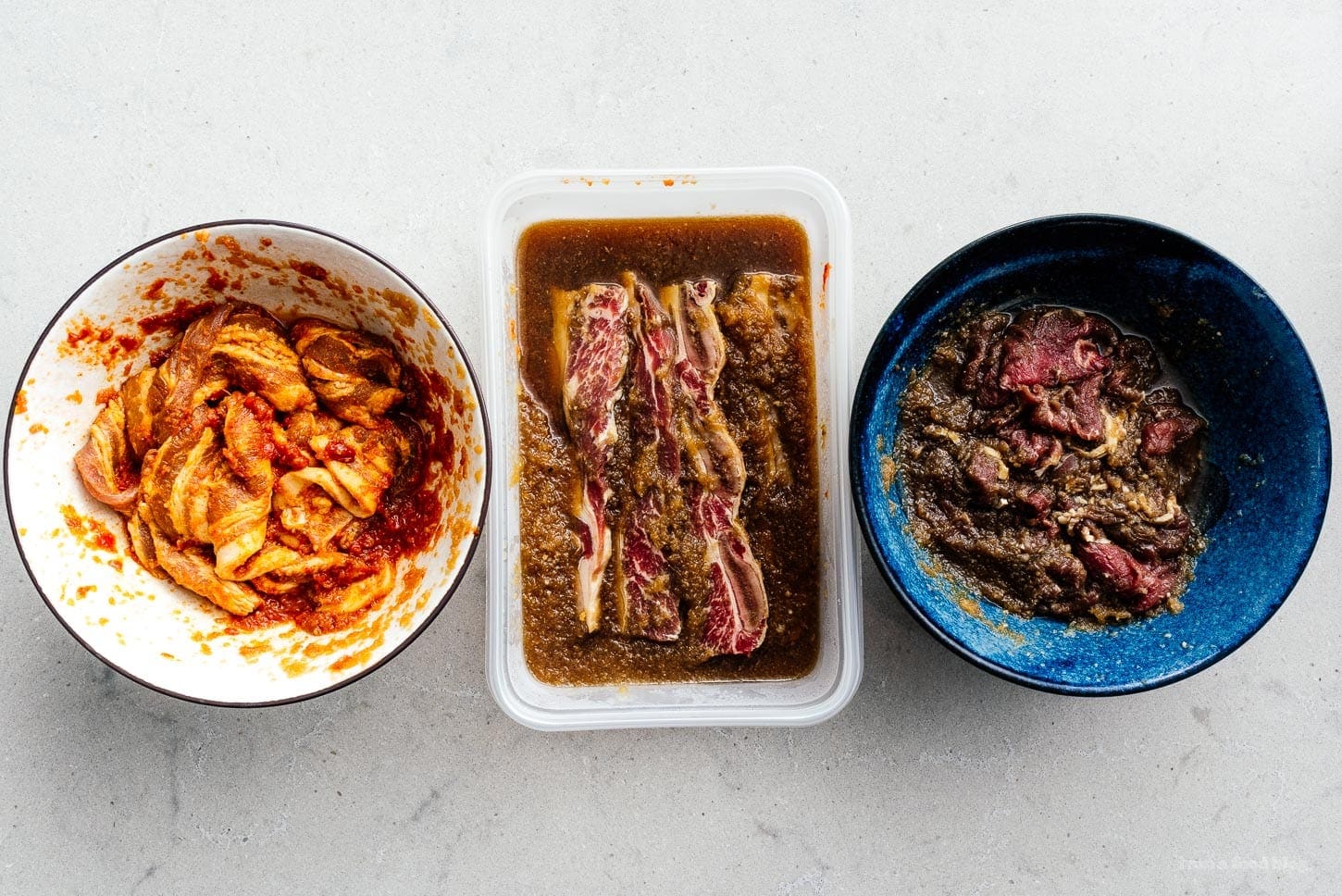 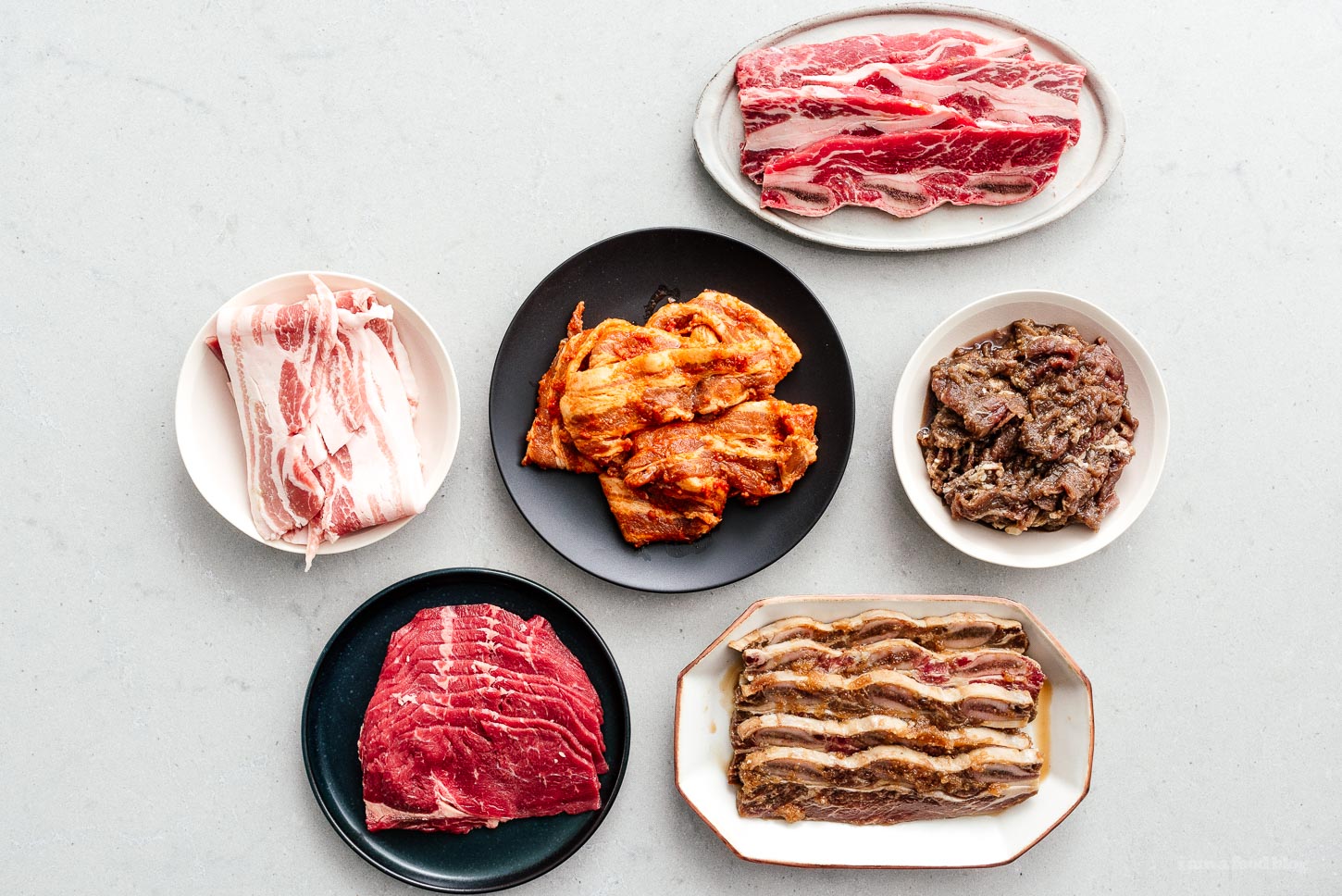 If you’ve ever been to a Korean restaurant you know Banchan. They are absolutely a key part of Korean barbecue. Banchan, or side dishes, are placed around the grill for everyone to share. I always judge Korean barbecue restaurants for their banchan because you know if they’re taking care with their banchan, they’re taking care with everything else.

You can make your own banchan (please check out Maangchi for some great recipes!), but if you’re lucky enough to have an H-Mart in your town or close by, it’s worth it to go there because they have a whole HUGE refrigerated section of prepared banchan. Plus you can get some Melona ice cream bars and roasted seaweed snacks that are 10 times cheaper than the seaweed snacks at Whole Foods. 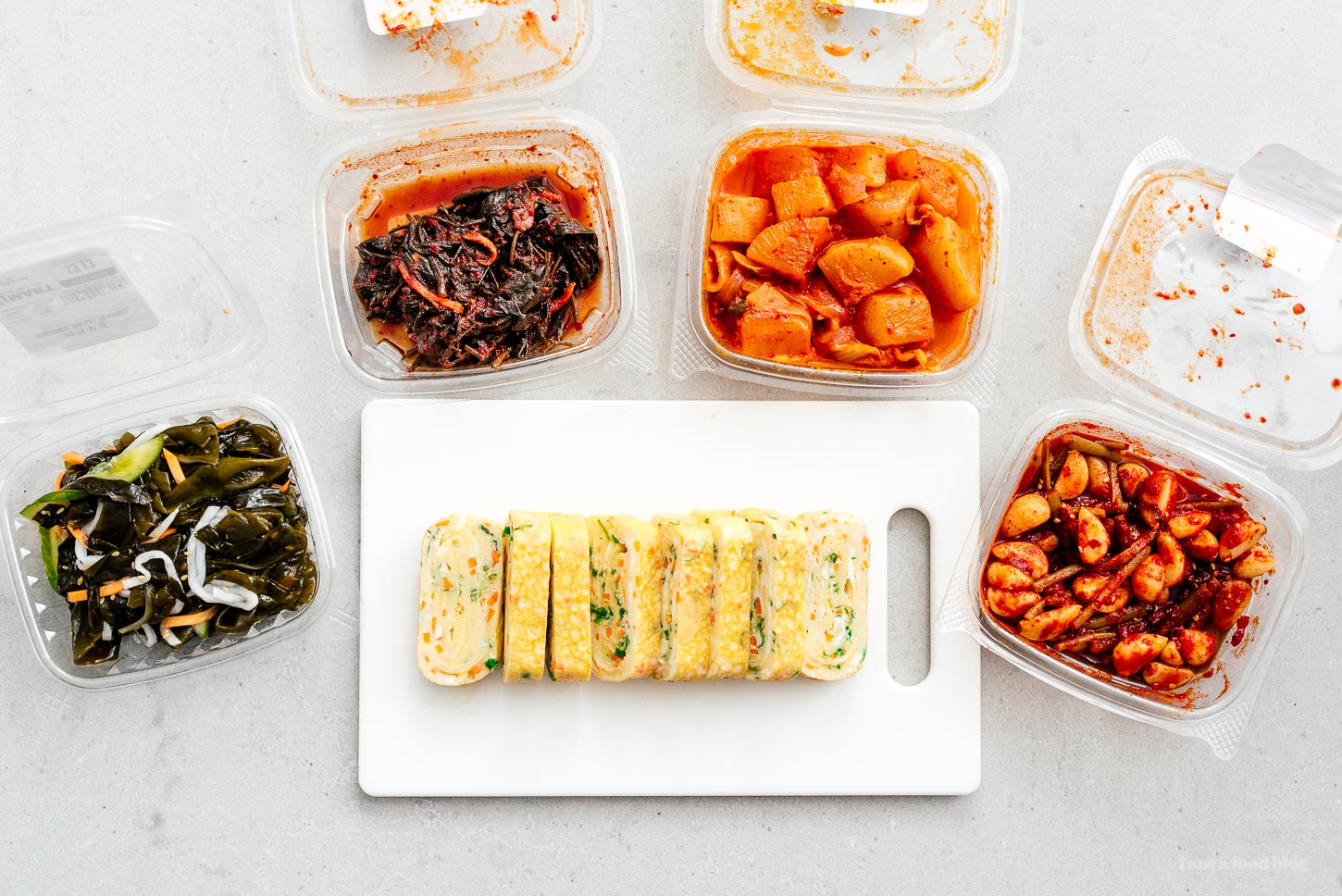 Some common banchan are:

My favorite banchan to make at home: gyeran mari

Rolled omelette/gyeran mari is the best banchan because they’re pretty and taste amazing too! How could you not love rolled eggs with tiny vegetable confetti?! Here’s how you make it: 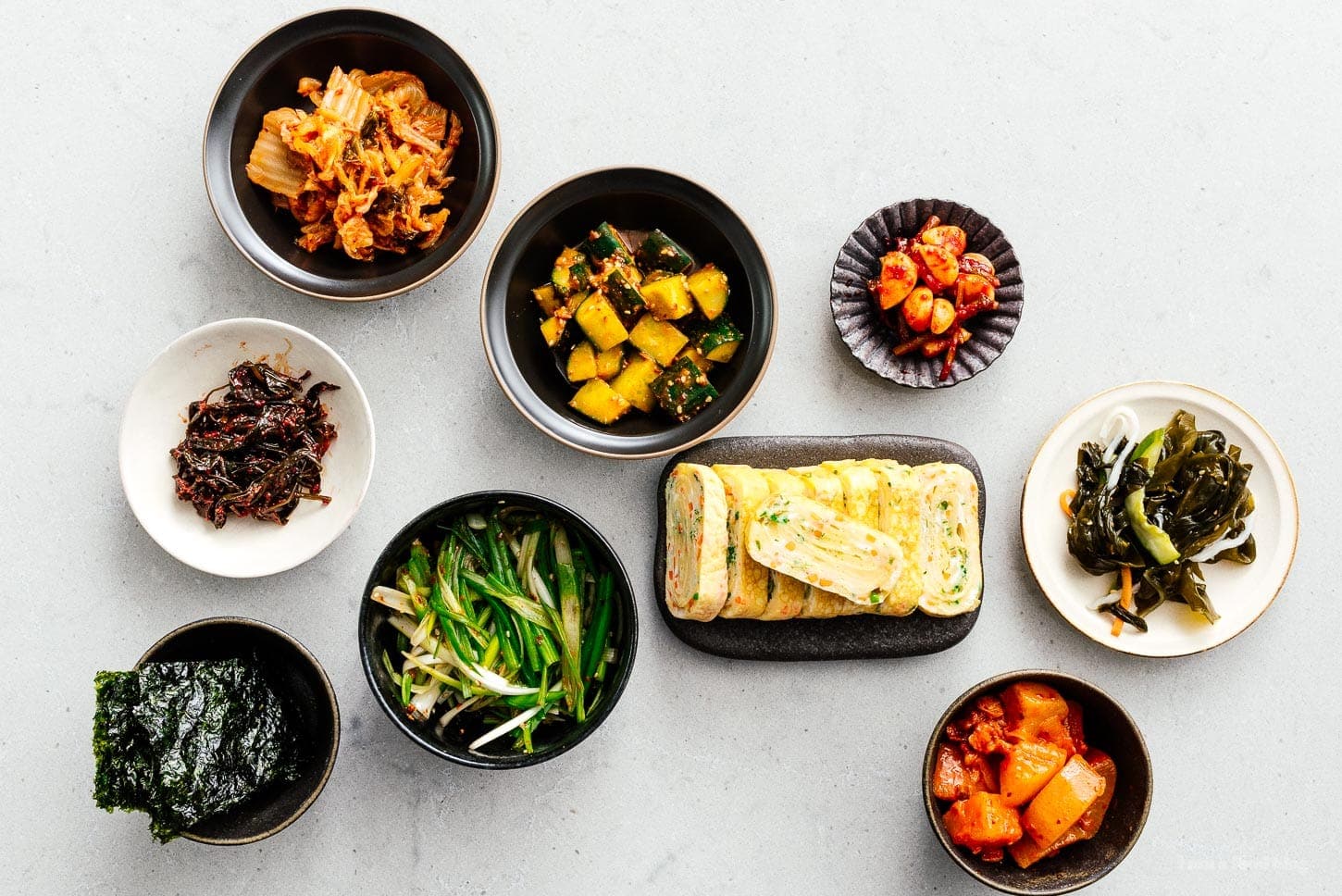 It isn’t a KBBQ party without sauces! The table needs sauces and seasoning so everyone can customize to their hearts content. 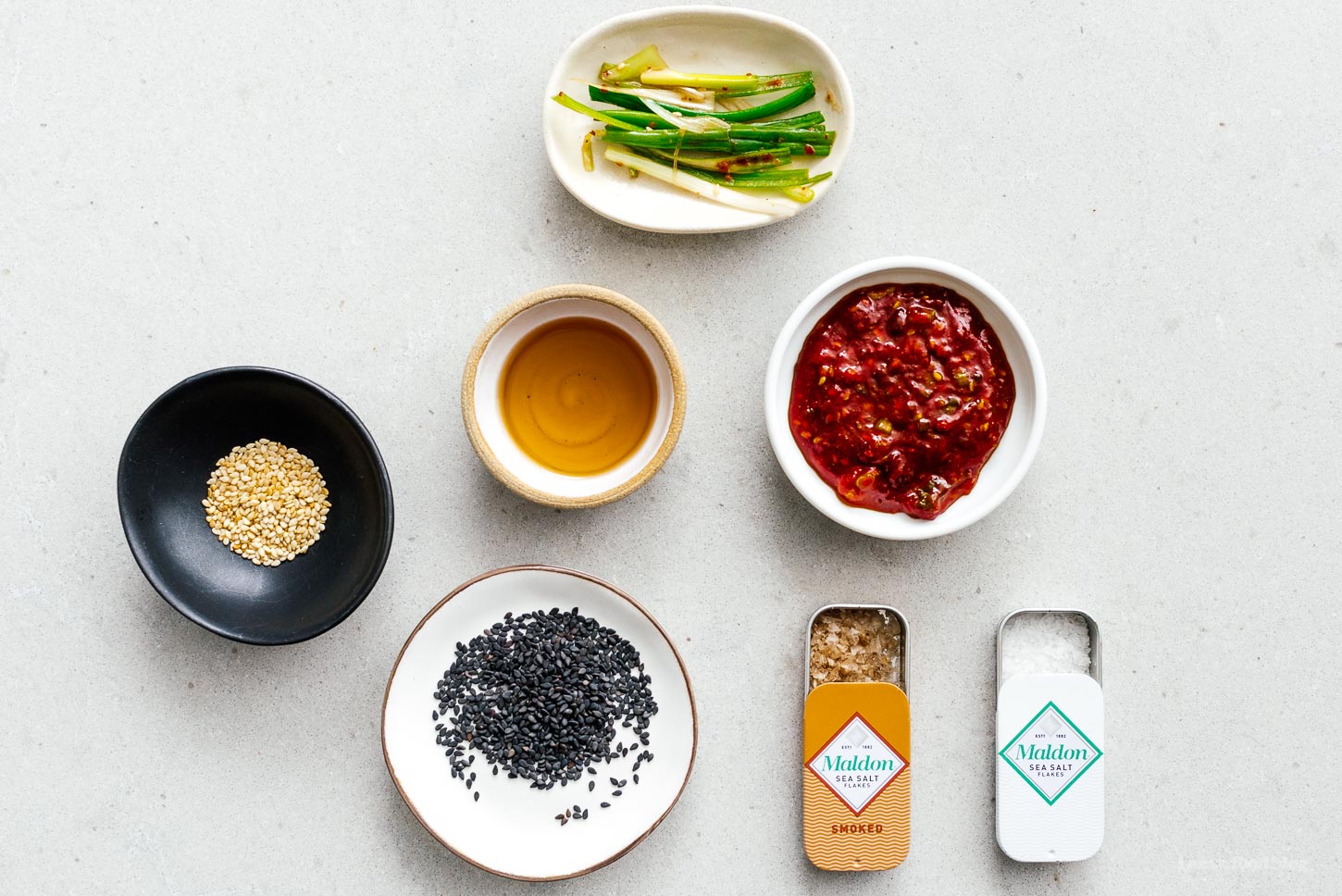 Here are three KBBQ dipping sauce recipes to get you started

A super savory sauce that lets the flavors of the ingredient that you’re grilling shine through. 2 tsp toasted sesame oil plus 1 small pinch salt and freshly ground black pepper.

This is a thick sauce that works best when you scoop it in your ssam! 1 teaspoon each doenjang, gochujang, toasted sesame oil, honey, toasted sesame seeds and 1 clove garlic, minced.

This is a basic sweet and spicy sauce that goes well with everything. 1 tablespoon each of gochujang, sugar or honey, and rice vinegar, plus a squeeze of fresh lemon and thinly sliced green onions or toasted sesame seeds.

You’ll probably be full after all the meat, but most KBBQ places offer rice and noodles at the end, just as an ending to the meal. Mike actually loves putting rice into his ssam, so if you like, serve up some bowls of rice with your KBBQ. As for noodles, well, who doesn’t love noodles? Super popular is naengmyeon, or cold noodles, because after all the heat, you’ll want to cool down with a bowl of slippery, savory icy cold noodles. 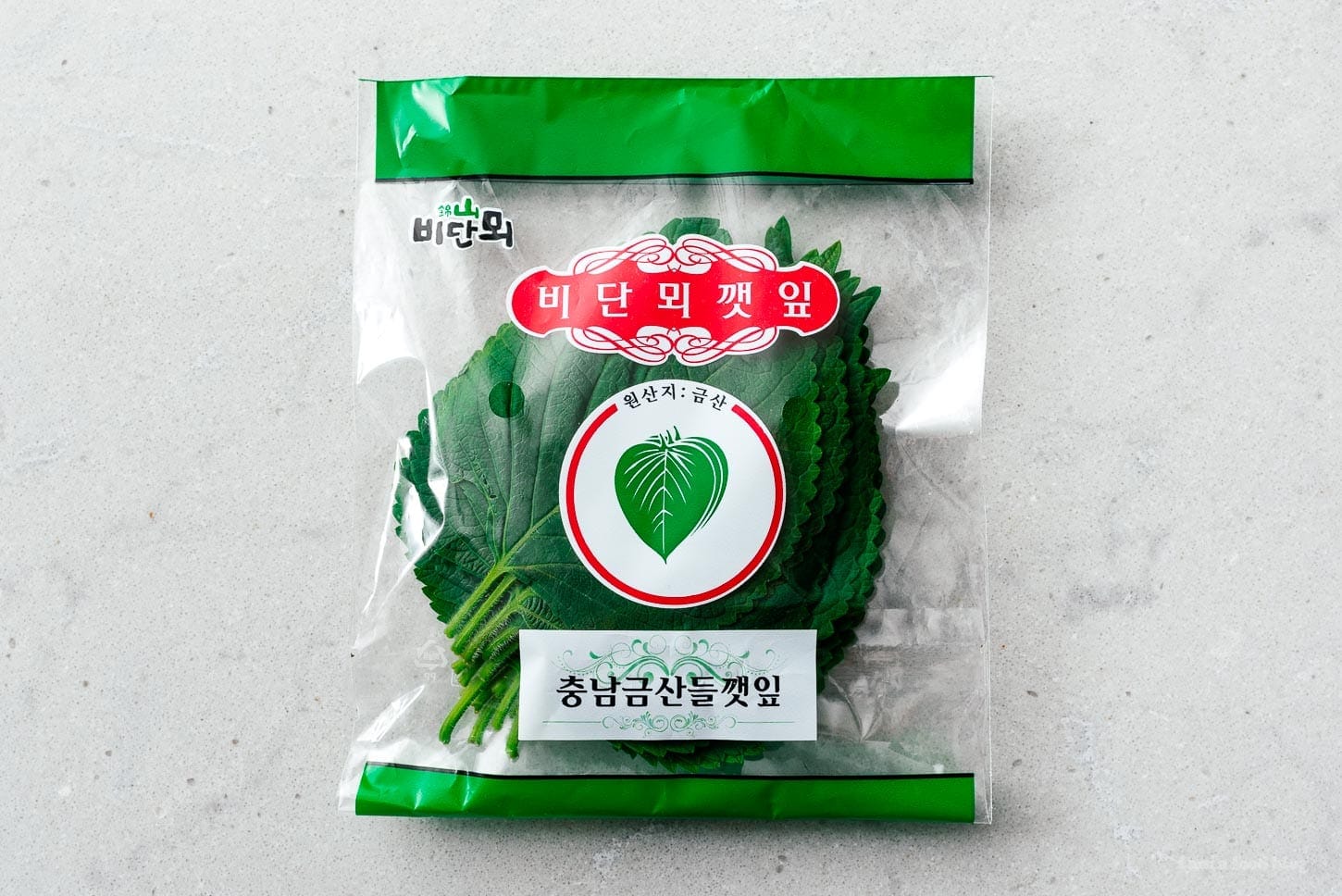 How much food/meat should I prepare 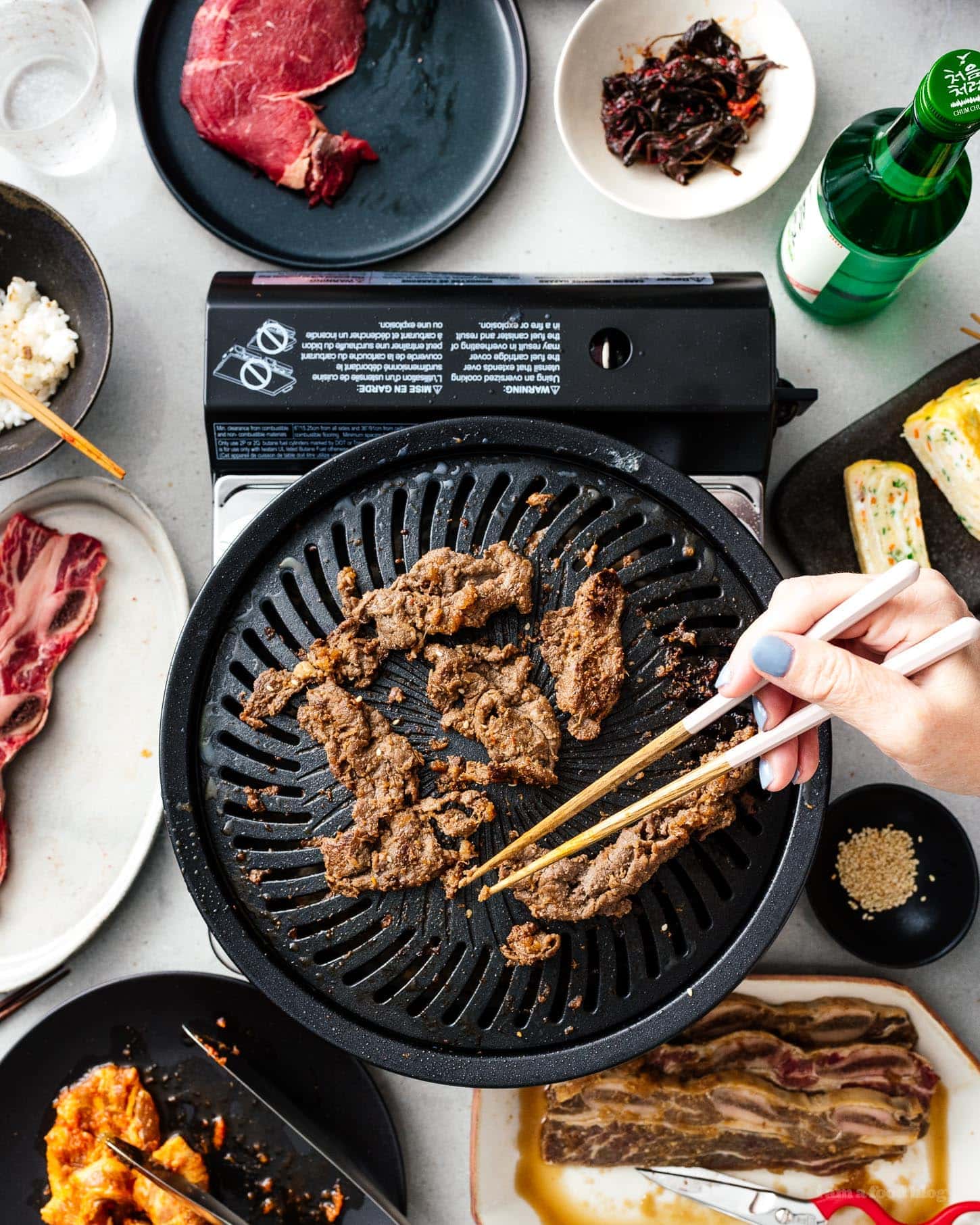 What if I don’t want to make the bulgogi marinade?

You don’t have to! Lots of times Korean BBQ actually comes naked so you can appreciate the pure flavors of the meats. This is actually how Japanese people like to do Korean BBQ at yakiniku. We kept some of the meats plain so we could enjoy them with salt and sauce.

Not going to lie, if you’re grilling meat, there is going to be smoke, especially if your meat is marinated. KBBQ restaurants have very powerful hood fans that suck up the smoke so you don’t notice it when you’re eating there. To keep smoke at a healthy level at home, make sure your windows are open and your hood fan is on.

Better yet, now that it is summer, have your KBBQ feast outside! Heck, even in the winter it’s fun to grill outside, underneath blankets. In Seoul, they have outdoor places where there are heaters and blankets for a cozy experience.

To minimize smoke, always cook unmarinated meats first, then move on to marinated meats. If it starts to get extremely smoky, take a break and change or clean the grill plate.

How to set the table

Aside from the grill and the ingredients, there are a couple of things that will make your KBBQ night go smoothly.

What to drink with KBBQ

Most people like drinking beer and soju. Of course makgeolli, a sweet milky rice wine, is super popular too. You can also do mixed drinks like Yakut and soju, Melona and soju, or soda and soju. If you’re going non-alcoholic, iced teas are perfect. 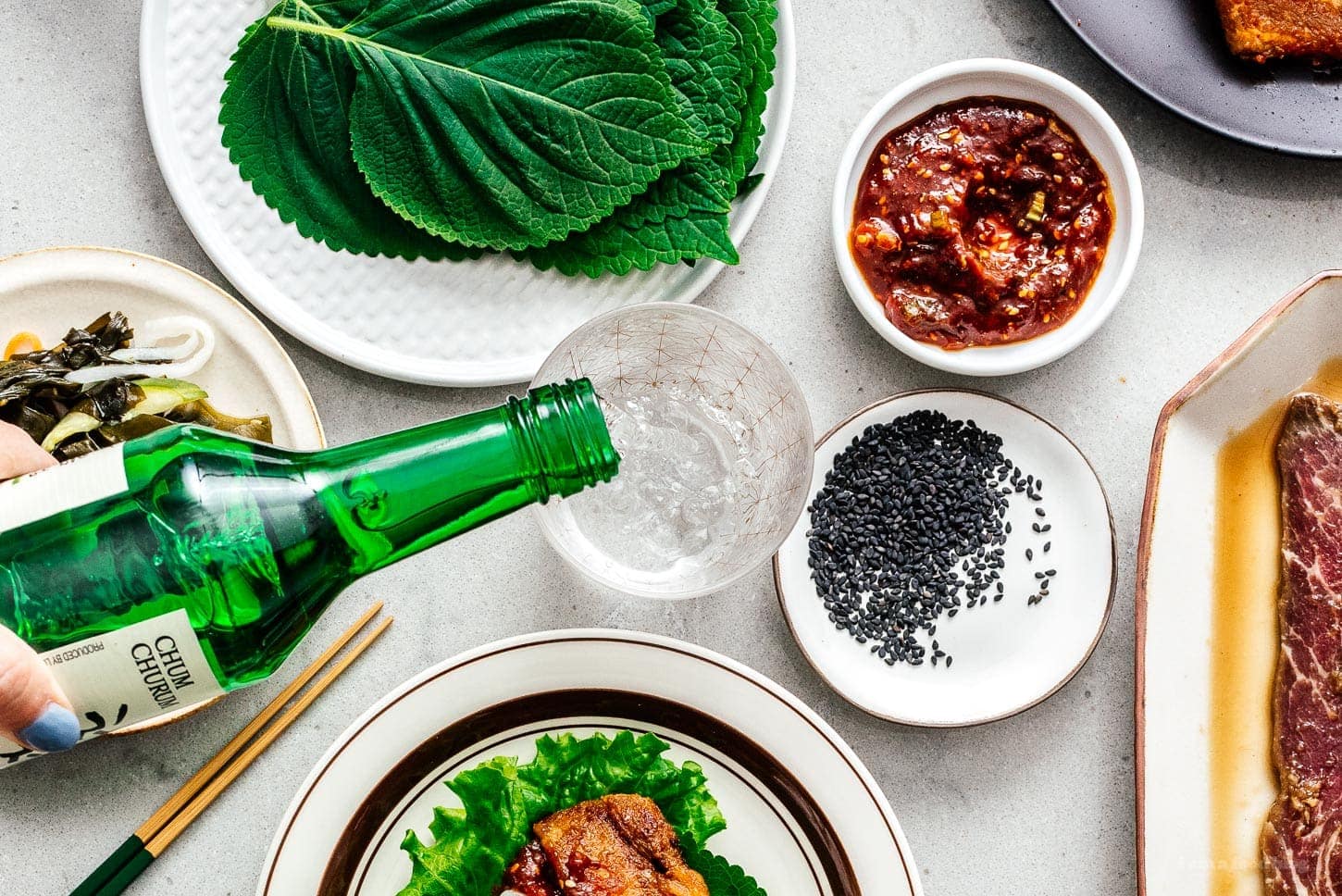 I hope this post has inspired you to do Korean barbecue at home. Really, it’s a ton of fun and SO delicious. 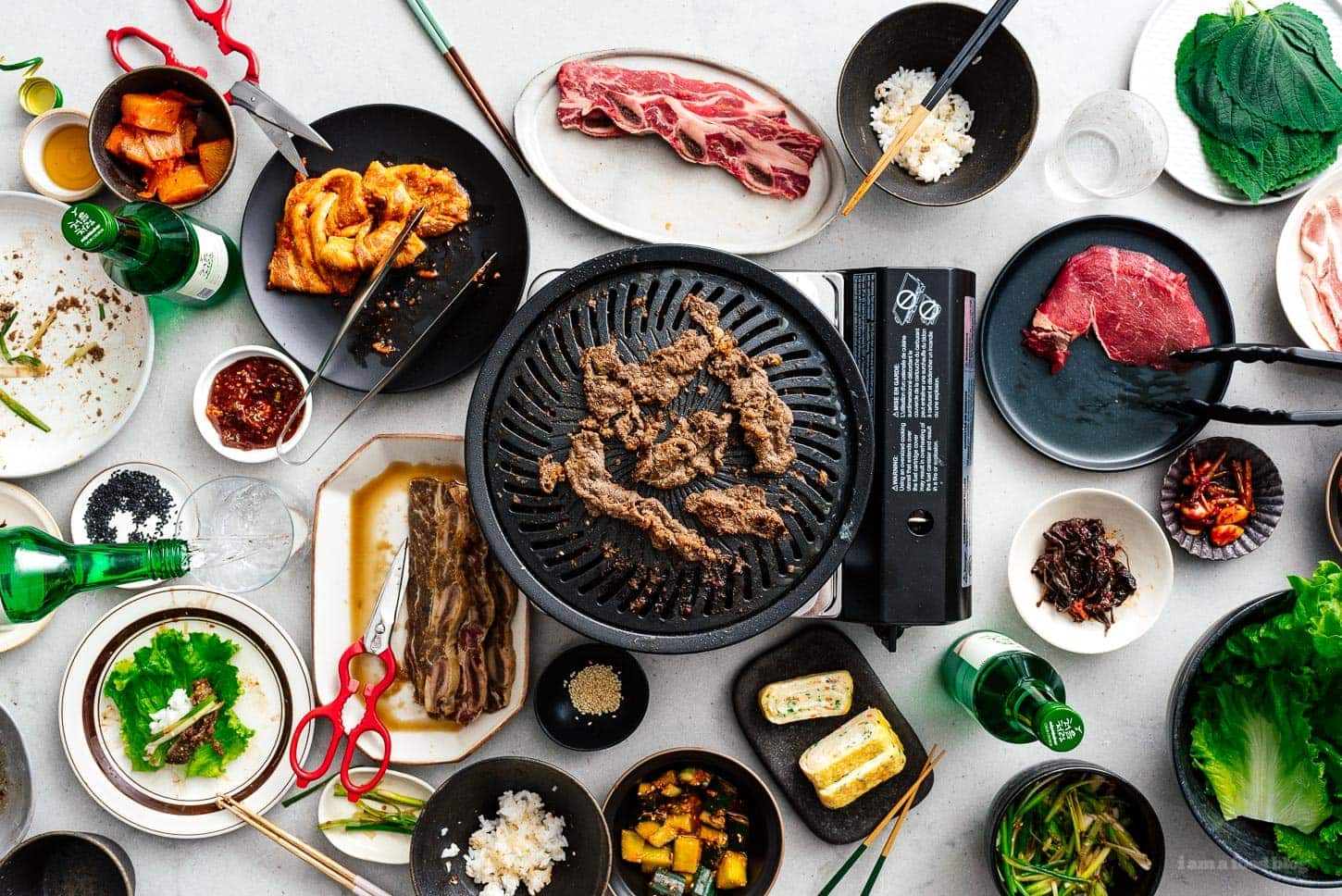 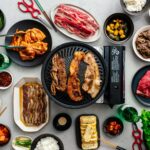 A complete guide to Korean BBQ at home featuring Kalbi short ribs, bulgogi brisket and spicy bulgogi pork belly, as well as all the fixings needed for a night of celebration, fun, and meat.
Serves 4
.wprm-recipe-rating .wprm-rating-star.wprm-rating-star-full svg * { fill: #f5a623; }4.81 from 26 votes

Makes about 3 cups marinade.
You aren’t restricted to these meats, feel free to buy whatever strikes your fancy or is easy/comfortable! For chicken, try chicken thighs, cut into 1 inch pieces. For pork, try pork jowl if you can find it!
This is probably actually enough food for 6 but it’s better to have leftovers vs. running out of food at a Korean BBQ.
Estimated nutrition doesn’t include side dishes, sauces…or alcohol.